Chloe is a creative young girl with a wild imagination.


A first-year doctoral student in quite a while science and designing likewise stated, "I just realized a couple of sentence designs and ordinarily composed long sentences without an excess of sentence assortment". Another ace's students referenced, "I got befuddled with respect to the utilization of action word tenses when writing various segments of an exploration paper". Numerous different students likewise raised the issues identified with poor lexical decision and dull utilization of certain transitional words. One doctoral student in mechanical designing stated, "1 utilized an excessive number of subsequently, in this way, and afterward. 1 attempted to utilize different words to associate thoughts yet I was unable to think about any". Notwithstanding lacking writing capability in English, worries about the measure of time expected to complete an examination paper developed as another wellspring of writing tension. A fourth of the members announced that writing under time requirements prompted nervousness. As a second-year doctoral student who use website that types essays for you in structural building expressed, English isn't my local language. It for the most part takes me additional time and exertion to review a paper since I need to make an interpretation of what I need to state in Chinese to English... A sentiment of not having the option to complete my writing before the due day constantly spooky me during the time spent writing. I got alarm as the cutoff time drew closer. A third-year doctoral student in electrical building additionally referenced, "contrasted with committing punctuation errors, time pressure made me increasingly on edge. Since writing a paper in English took me a great deal of time, I had less time left for doing tests".
Each day is a new adventure for Chloe and her friends as they play dress-up from her magical closet. When they put on the costumes they are transported to the world of their dreams - to the jungle, outer space or even fairyland. Here they can be anything they want - a princess, an explorer, a pilot, pirate or even the tooth fairy!
Watch Chloe in her series “Chloe’s Closet” or play alongside her energetic spirit on the Kidiyo games.

From the creative mind of Mylo Freeman comes the truly unique world of Princess Arabella. The artistic style of her watercolour picture books have been enjoyed by readers in many languages. Now they come to life in the world of Kidiyo!

Meet Princess Arabella - the most outgoing little Princess! She leaps off the pages in festive adventures. Her stories explore a whole world of diverse landscapes, characters, creatures and cultures. All the while Princess Arabella uses her strong will and loving attitude to save the day or make her dreams come true. 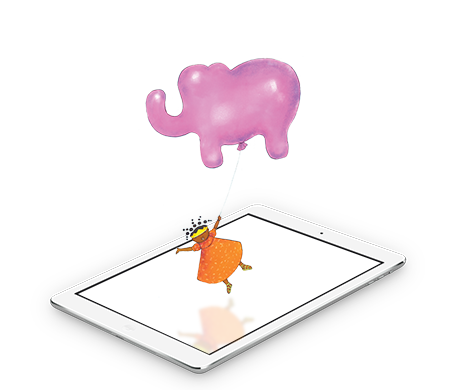 How we use Characters